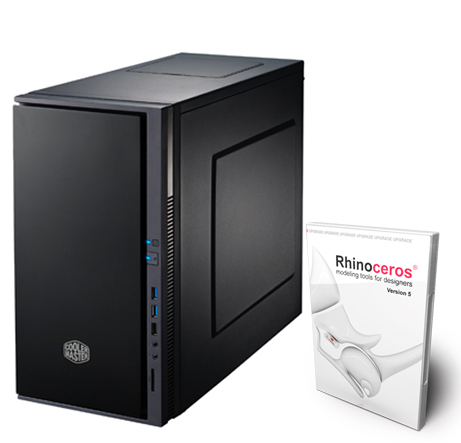 Rhinoceroshop is an Official Dealer McNeel for Rhinoceros 5.0 (Rhino3D) in Switzerland

This powerful CAD computer based on the current Skylake Prozessortechologie. The Core i5 processors 6th generation show a significantly better energy efficiency with increased performance over previous processors. The combination of a current Core i5 processor with at least 8 GB of memory ensures good performance in the construction of complex objects and graphics.

the equipment is supplemented with a PNY K620 professional graphics card with good graphics acceleration that outputs graphics and images quickly. A fast and noiseless Solid State Disk with Sata 3 connection ensures fast data access. With the Sata 3 Solid State Disk also large amounts of data such as textures are quickly recharged and constructed.

The new Intel processors Skylake power efficient. For a quiet operation is ensured. CPU coolers are used with large heatpipes to reduce the noise to a minimum. In addition, the housing is equipped with insulation mats.

With the online configurator PC computer can be expanded flexibly, for example, with another graphics card or more hard drives. We build your computer so that it is optimally configured for your applications.

Delivery in about 5 days. All brentford computers come with the operating system installed and installed software, all drivers and updates are up to date. It is preloaded unnecessary software. brentford PCs are delivered ready for operation including a 3-year warranty and support hotline!

The Rhino 5 development process started more than five years ago with one overriding goal—to remove as many of your workflow bottlenecks as possible. That meant making Rhino faster and able to handle much larger models and project teams, in addition to making thousands of large and small improvements

Thanks to more than 40,000 pre‑release users, we were able to field test and refine Rhino 5, making it the most stable version ever.
Object creation in Rhino continues to be enhanced. Rhino 5 adds dozens of refinements to existing tools, some new commands, and the new lightweight extrusion objects.

Editing complex models is faster and easier with hundreds of new and enhanced commands including:

The Rhino 5 interface includes new tools for editing and object creation, including: