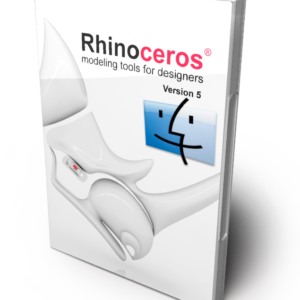 No printed helpbook is provided: the digital version is available for free download.

For educational institutions only (proof of status is required).
Full-featured commercial software at a discount.
A 30-user license to use Rhino on the computers in a single classroom or lab (one room). A network is not needed. Or, a 30‑user floating network license. A network and the Zoo is required.

The license is Educational: same features as the commercial version; for students, faculty (teachers, instructors, and professors), staff, and schools only (proof of status is required).

More than 3,500 enhancements the Rhino 5 development process started more than five years ago with one overriding goal—to remove as many of your workflow bottlenecks as possible. That meant making Rhino faster and able to handle much larger models and project teams, in addition to making thousands of large and small improvements

Thanks to more than 40,000 pre‑release users, we were able to field test and refine Rhino 5, making it the most stable version ever.

Object creation in Rhino continues to be enhanced. Rhino 5 adds dozens of refinements to existing tools, some new commands, and the new lightweight extrusion objects.

Editing complex models is faster and easier with hundreds of new and enhanced commands including:

The Rhino 5 interface includes new tools for editing and object creation, including: